Bathing in Sound to Heal 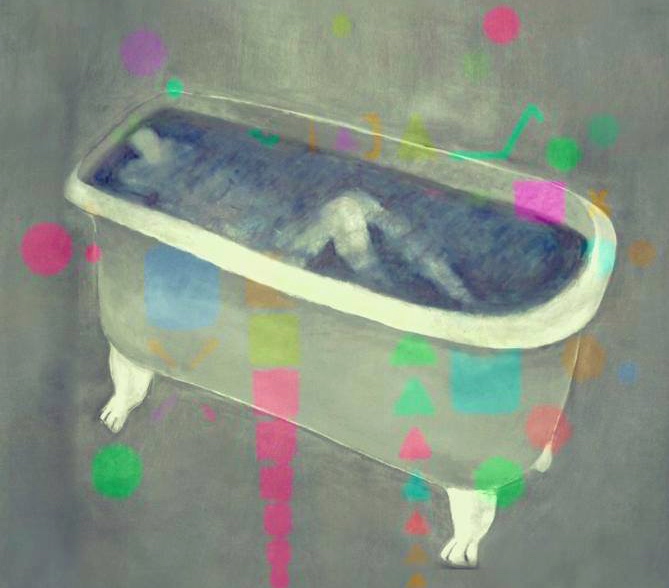 I have always been passionate about sound since I was a child. Music got me through almost every emotional situation I have ever experienced. Music has helped me explore all emotions more deeply, whether they be sadness, anger, happiness, excitement, fear, disgust or surprise. 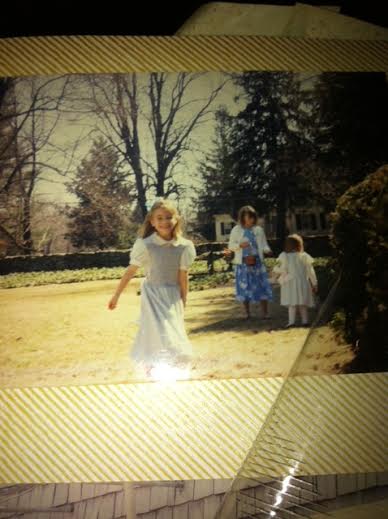 The duende (the power to attract through magnetism) of sound or a song or an album is magic, bringing visions reprising inexplicable moments in time where everything feels fuzzy and buried inside of you forever. It can make you remember smells, touches, tastes, and even what you were wearing or what you said at a specific moment in time. It’s a connection, you relate to it, and it can even evoke out-of-body experiences, maybe bring you to a higher level of awareness, or connect you with your subconscious in a way that you wouldn’t without it. 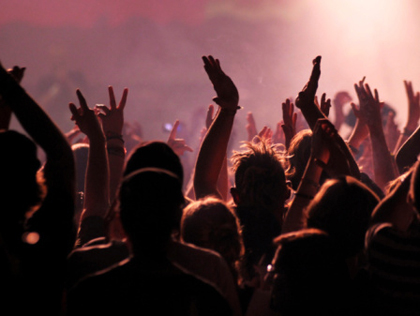 Sound connects crowds; it brings people together. Melodies, notes, tones, frequencies, beats, can make your heart sing, get you out of your head, make your legs dance, burst you into tears or laughter, release an old pain, remember a special person who has passed, or the first time you fell in love, or your first heart break.

In one instant music has the power to change one feeling to another, it’s that quick. 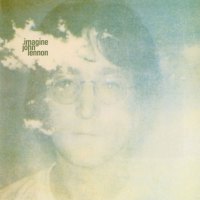 Dr. Kathryn Hayward, whom I have been blessed to know for the past six years, and I were having one of our conversations about sound healing. We were talking about one of the many incidents of gun crime in America and the recent terrorist attacks in Paris.  I said to her, “What if a sound or a song came on right before “perpetrators” were about to shoot? Would it change their minds? Would it bring them into another state that was more peaceful? For example, if the song ‘Imagine’ by John Lennon all of a sudden started blasting, would that affect the attackers?” 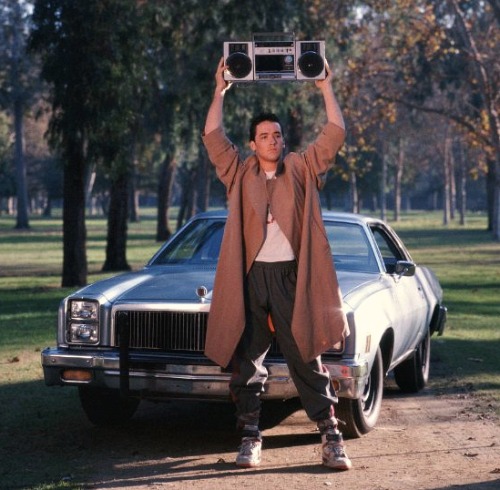 John Cusack in the film “Say Anything”

If this hope could be so, I want to be a part of that hope. Maybe it’s idealistic, maybe I’m a dreamer, but I still want to be a part of the possibility of a movement to help people clear their emotions, harmonize themselves, lessen their anxiety, help them process this crazy life, this beautiful life, and maybe even past lives.

I have studied and made art for the past 20 years, and have been playing in a couple of bands (TEEN and Dual-Split). I also study sound healing and sound voyages.

I got more serious about sound after my late boyfriend Charlie Staats passed away 7 years ago while we were living in NYC. It was a very sudden, traumatic death, leaving me in a state of urgency to find more tools to deal with it. One of the ways that helped and still helps me through is music and sound.

I was attracted to ambient-type music to relax, to go into my body and assist me in the introspection and healing that I needed during that time. I was looking for ways to soothe my anxiety, my pain, and naturally I went in deeper.

As Bjork once sang, “My headphones they saved my life.” I had them on all the time, running from one subway to the next to catch my next class, my next job. I was able to deal with the realities of the world on top of my own fragility from my trauma.

I began spending some more time with two great artists and friends. Camilla Padgitt Coles started the Perfect Wave magazine/label which is based on experimental ambient/healing tendencies. Patrick Noecker studies the dynamics of sound frequencies and hertz in his own way, that he calls Cellphonism. He created an app called Transmissions that interacts with the audience. The audience can interact and play drone sounds with him via his iPhone app on their own iPhones. I found this pretty fascinating and inspiring. 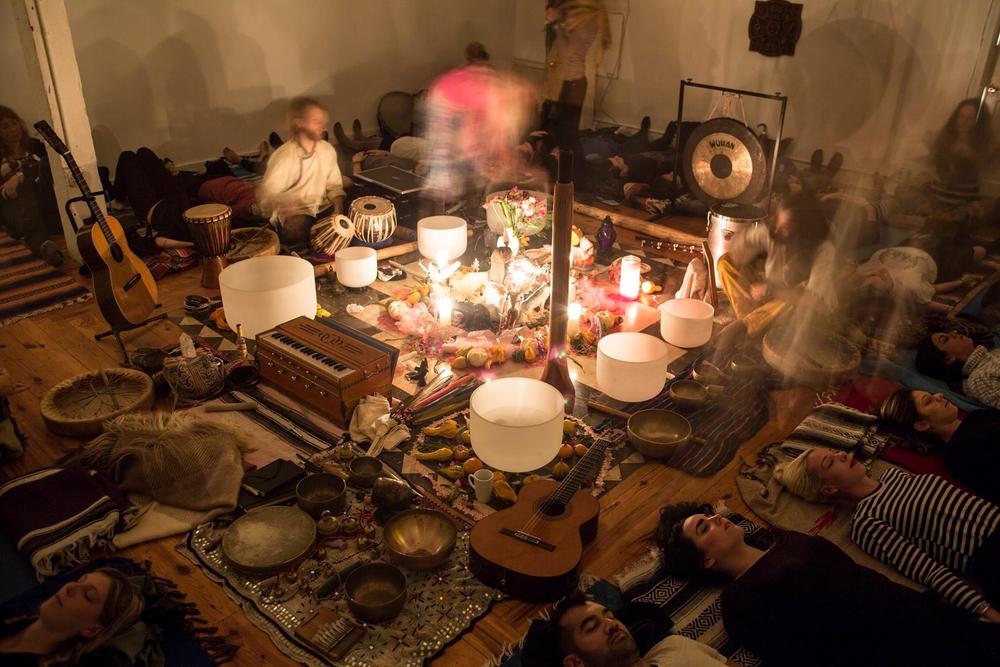 Camilla introduced me to Golden Drum Sound Baths which I started going to down the street from me in Greenpoint, Brooklyn. I found the experience very soothing and exceptionally healing.  Lying down and getting bathed in healing sounds was another way for me to connect to my pain in a positive way. I experienced seeing visions, going in and out of my body in a way in which I was centering myself. I always loved going to concerts and still do, but I had never had an experience like this. I could connect to passed loved ones and go on voyages like in a dream. 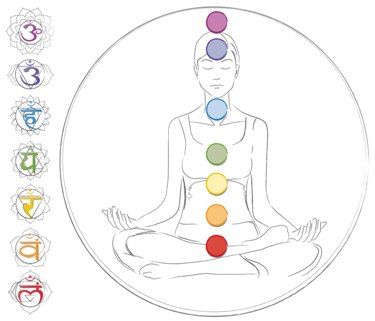 At Golden Drum, the experiences I had opened me up to start learning about cleaning my Chakras with sound. I was familiar with the importance of Chakras from my eldest brother who had been mentioning them to me for many years. I was always dismissing him saying, “Yeah, yeah Chakras, what is that new age stuff?” After Charlie passed, I paid more attention and learned that Chakras are energy wheels or disks in the body through which energy flows. There are seven main Chakras, which align in the spine, starting from the base of the spine up through to the crown of the head. To visualize a Chakra in the body you can imagine a swirling wheel of energy where matter and consciousness meet.

After many attempts to clear my Chakras with different approaches, I found that I was most attracted to clearing them with sound. I began studying the theories underlying the benefits of clearing them with sound and frequencies. Why not be able to sit or lie down, or even work on writing or painting, and let the sound do the work!

Music is organized sound. Virtually all cultures have used the power of music therapeutically.

Sound has been used in meditation for thousands of years. Assisting your body and mind to find a quiet space helps you release deeply and find space and balance within yourself. 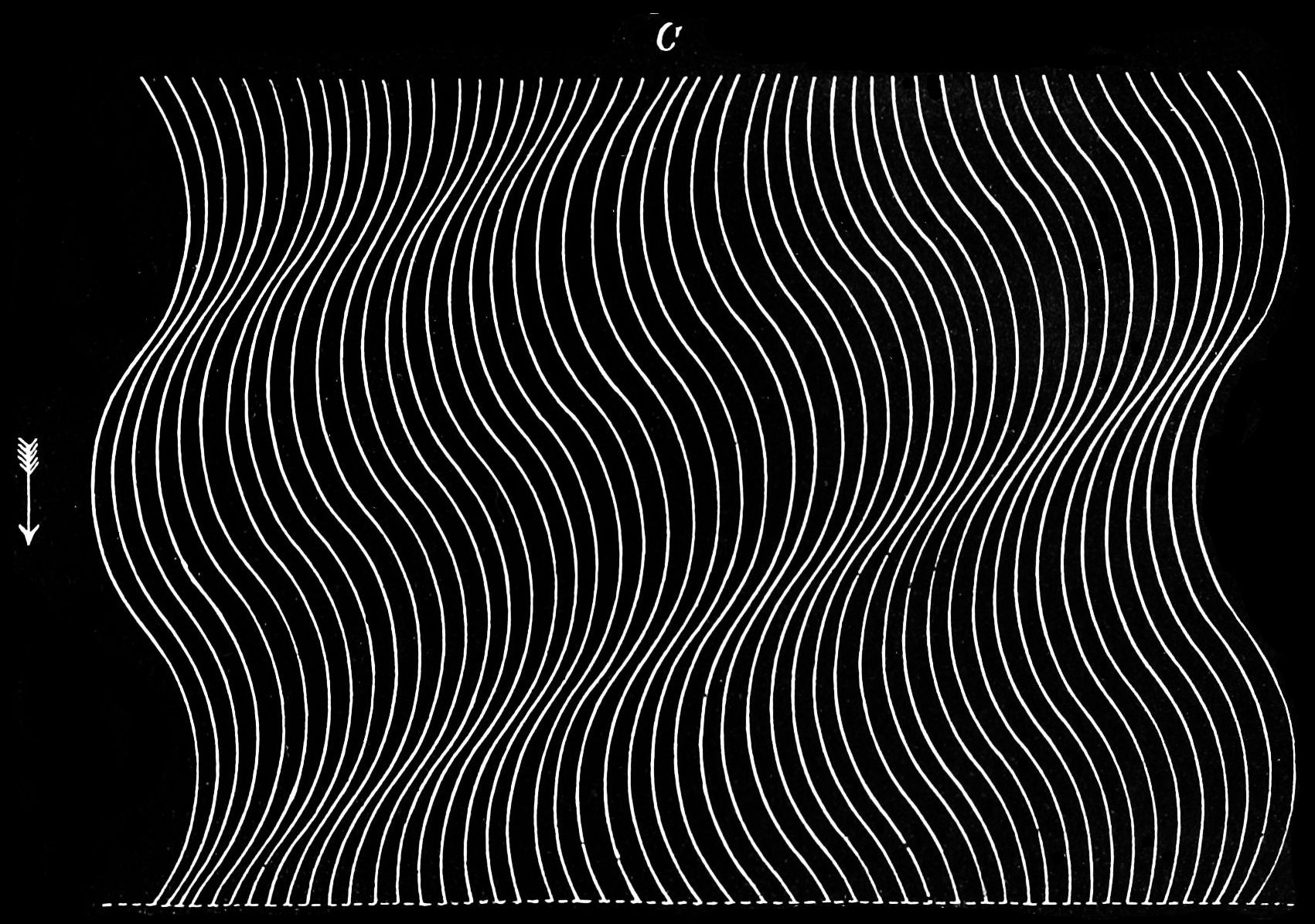 Image of compressed and rarefied air particles of sound waves

Everything, including you, is made of vibrations with distinct resonant frequencies. Frequencies are incredibly powerful, and can bring you back to your own natural balanced frequency when you are out of balance.

Fabien Maman’s book, The Role of Music in the Twenty First Century, gives dramatic accounts of the effects of sound on cancer cells. Using music to evoke “deep relaxation” is one of the simplest and most effective ways of assisting the body to heal itself and work on the deepest cellular levels.

A lot of sound research was done in the early 70’s by biophysicist Gerald Oster and published in Scientific American. Oster states that, “In the future, what we think of as sound healing will be called frequency medicine.” Oster showed that when a tone is played in one ear and a slightly different tone is played in the other ear, the difference causes the brain to create a third, internal tone, called a binaural beat. The theory is that this syncs the brain waves in both hemispheres, a process dubbed “brain-wave entrainment”.

“When the brain is in synchronicity, there’s more focus,” says Carol Moore, marketing director of Monroe Products, which makes Hemi-Sync verbal meditations and music that contain embedded binaural beats. For example, “Our sleep titles help drop you into the deep delta waves. Electrical activity in the brain gets slowed down.” Some of the products are designed to help people recover from a stroke or surgery, deal with chronic pain, or become more relaxed while undergoing chemotherapy. “You might envision the drugs as a love potion, rather than poison. It’s creating a state where you can say, ‘This is coming into my body to heal me, not to do damage to me,’” says Moore.

A healthy organ or body part creates a natural resonant frequency in harmony with the rest of the body. When the vibration of a part of the body is out of harmony we can develop dis-ease. With dis-ease a sound pattern is made in the affected part of your body. When sound is projected into the dis-eased area, correct harmonic patterns can be restored. The human voice is perhaps the most powerful musical instrument, but crystal and Tibetan bowls are also very powerful.

In the Sound Bath experiences that my partner Tristan Martineau and I will be offering at the Living Whole immersion retreat in Ávila, Spain, you will feel that you are literally taking a bath in sound. Participants lie down in a comfortable position and let sounds ease into their ears and bodies. If you wish, we touch some of your Chakras with specific essential oils made by Maya Minwah, to engage your sense of smell while you bathe in the sound.

In the future I would love to make Sound Baths even more of an experience invoking all the senses, adding healing colors, food, projections, and having more special guests. I would love to add jin shin jyutsu in combination with it. More to come, more to share, more to experience!

Maia Evarista Charlotte Ibar was born outside of Paris in 1982. She comes from a large, close-knit Basque/French family of creative, intense personalities who emigrated to the U.S. in 1984 and split their time between the U.S. and the Basque region of France. Maia has been making art since she was a child. She attended Walnut Hill School, Parsons Paris, Pratt Institute, and holds a Masters of Painting from The New York Studio School. She has been investigating the process of painting, video, drawing, installation and music as rituals connected and related to the mind, body and spirit. The journey and process are a way to teach herself about her sub-consciousness, revealing her deepest emotions and the path that her life has given her. She regards International Integrators as an organization that furthers that important work. Maia is the artist for the Odyssey Family Systems Companion Guide by Dr. Hayward. Enjoy Maia´s work at www.maiaibar.com.