Food and Relationship—Slowing Down to Enjoy Both

I grew up in a Midwestern family that relocated to the East Coast of the United States when I was still an infant. My mother was a dietitian by training and we ate as most American families did in the 1950s. Meat, potatoes and well-cooked vegetables were our staples, all piled on the same plate and served at the same time. Whole milk was my usual beverage.  While we sometimes lingered a bit at family meals, the eating was quite efficient and we dispatched our plateful in a relatively short time. What I remember most about those meals was the conversation, but it was often far too brief.

My path in life has been heavily influenced by Spanish language and culture, and not because I have an iota of latin blood in my veins. When I was in second grade, my father had to go to Argentina on business for three months and my mother, sister and I spent that period in Kearney, Nebraska with my mother’s parents. While I have many fond memories of that visit to the state of my birth, I did miss my father and he promised me that, if I ever learned Spanish, he would take me to Argentina. I tucked that one away and let it incubate.

Foreign languages were not offered in my school system until the seventh grade. Almost everyone chose to study French in those days but I was a clever lad and I knew that there was no trip in French. So I started to study Spanish and by the time I reached high school I was quite fluent thanks to incredibly talented teachers. And when I was in tenth grade my father made good on his promise and took the whole family to Argentina, and then on to Chile and Peru. I was hooked on Spanish.

I spent the next summer in Mexico attending a teacher’s college program in the mornings and trooping around a small university town with a mentor my own age the rest of the day and night. I learned about a different kind of social life from the suburban one in which I had been raised. I learned how to hang around with friends in the public square eating fruit or enjoy long evening parties with food and refreshments talking about the subjects that capture the attention of most 16-year-olds. Mostly girls, love and girls. My Spanish vocabulary of female body parts increased dramatically.

Between high school and college, I worked in Stockholm but eventually found my way to Spain at the end of the experience. I traveled on a Eurail Pass for three weeks and began to observe the similarities in relationship to food of Spaniards and Mexicans. But it was not until my senior year in college that I returned to Spain and began to experience families and their meals in a much deeper way.

On my way by train from Paris to Madrid in 1970, I had the life-changing good fortune to meet a young Spanish priest named Ángel who shared my interests in literature, art and music. By the time we arrived at our destination, we were deeply engrossed in conversation and had become fast friends. I spent quite a bit of time with Ángel and his mother and sister, met many writers, artists and musicians, and became thoroughly immersed in Spanish life and culture. I rented a room in the home of an older woman who had recently been widowed, and she fed me dinner most nights and her grown sons and their families adopted me for meals on weekends. I was supposed to be taking courses at the University of Madrid, but this was in the Franco era of internal strife and the university was on strike during the entire three months that I was there. In any event, I probably learned more having time to spend with my Spanish families than I ever could have learned in a classroom.

Meals in Spain were, and mostly still are, gathering places for conversation and relationship. “Comida” starts at 2:00 p.m. or 3:00 p.m. and can easily last for two or three hours. “Cena” is the evening meal and starts after 8:00 p.m. and can often not begin until much later. Getting together with family or friends always involves food. If asked when I would like to get together with someone, the answer is always couched in terms of which meal we will share.

Spanish has a single word for what we call dinner conversation. “Sobremesa” is literally “over the table” and refers to the long conversations that accompany and follow a meal. When I first came to Spain, I had never experienced anything like it before. Conversation was often about the food itself, what region the recipe was from, how the food was made, who made the meal, where the ingredients were from, and so on. Perhaps this was a precursor of what today we might call “mindful eating”. Meals also were very much about people and their relationships.

Spanish meals are served in a way that facilitates conversation and relationship. Unlike in my family of origin, meals consist of various courses with usually no more than one food on the plate at a time. Perhaps we begin with some sautéed vegetables or a soup, then follow that with a salad. Next might be the main course, which might actually consist of two different courses. Then dessert, then coffee or tea. And, of course, on special occasions, there is always the potential for after-dinner drinks. Hours go by and the conversation never stops. 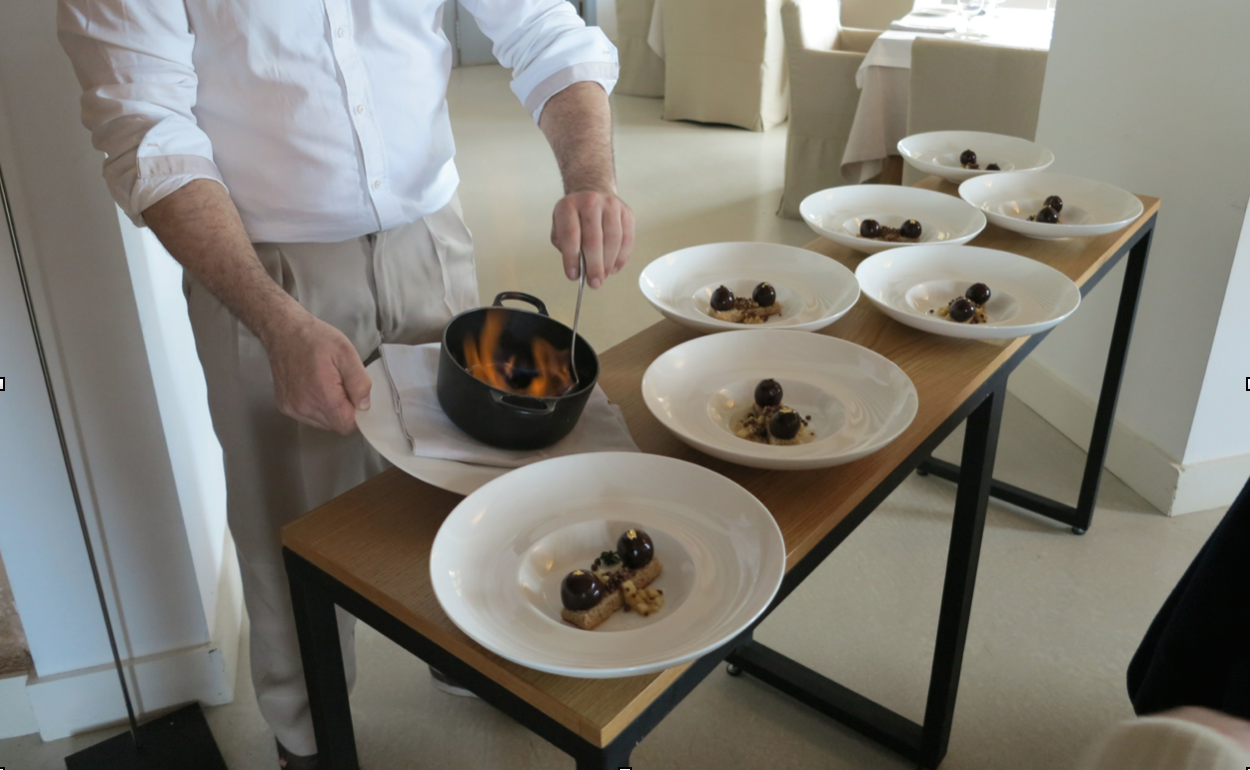 I now live in Spain. When sharing a meal with my Spanish friends, I rarely leave the table with the feeling of having over-eaten. Each course is of reasonable size and my body has the time to begin to digest one course before the next one appears. And the filling effect of each course registers in my brain before the next one arrives, so I am mindful of how much of each dish to eat. And I am mindful of the people with whom I am sharing the experience.

I have learned a lot over the years about healthy eating and how to prepare nutritious, plant-based meals. Many of the foods I enjoyed in my early days in Spain I rarely eat anymore. But I always try to serve or receive my meals in the style that I first learned in Spain. I love leisurely eating, one dish at a time, in the company of friends and family. Lifelong relationships nurtured over the dinner table are what I hold most dear.  And my body thanks me for eating more slowly and mindfully.

David will be facilitating the food and nutrition portion of the Living Whole retreat in March in the Redwood Forest of California. Along with Zoë Keller, he will work with participants to prepare meals for the entire group while learning about the benefits of a whole food, plant-based way of eating. David and his wife, Kathryn Hayward, reside in Mallorca, Spain.