The Mask – A Barrier to Belonging

Wanna know how messed up I am?  I went to a retreat last year where we were asked to bring a “sacred object” and tell others about it – and I spent ten hours preparing a two-minute talk.

Because it wasn’t enough for me to give a good talk, or even a heartfelt one.  I had to stun the crowd into silence, giving them no option but to halt the exercise, hold a ceremony, retire my jersey, and invite me to join their club – as President.

To get that response, I figured I had to put in ten hours.

I should have spent the ten hours at the gym.

Instead of awed silence followed by a ceremony, my talk was followed by a woman whose sacred object was a rubber chicken she squeezed when she was stressed. That was her talk — and the crowd loved her.

Another guy talked about his spirit animal and had the place rolling in laughter.

One woman held up an image of a broken heart and said: “When our hearts break, they break open.”  And everyone’s heart broke open with hers.

None of those speakers had a script.  They just talked and connected.

Not me.  I wrote my talk and polished it and memorized it and recited it.

I know what a hall feels like when a speech hits home.  I didn’t feel it, and I was devastated.  There were three people sitting across from me whose good regard I especially wanted, and it scalded me to see them moved by other speakers.  Oddly, though, I can’t say they didn’t like my talk — because I didn’t see their reaction.  I didn’t even look at them.  It’s hard to look at people when you’re trying to remember your lines, so I looked down, or up, or off into space.  I really wasn’t talking to anybody.

When the event was over, I left angry and embarrassed and headed off to lie on the ground and stare at the stars and think, “These are not my people.” For 30 years, I’d been going to silent meditation retreats.  For me, talking retreats were for people who couldn’t handle silence.  But within hours, this place had stirred me up and given me the urge to leave.

What was I doing at a talking retreat?!

I was performing — posing as an expert, trying to impress, hoping to arrive at the event by helicopter while others came in cars.

My sacred object, I had told the group, was stories of my kids.  For years I’ve captured these stories and saved them in my journals.  When I started to write my talk, I looked for the ones that moved me most.  I selected a few of my favorites, including the time my six-year old came to me and said:  “Dad, dad, dad:  Here is my head.  And here is my chest.  But where is me?”  I closed my talk by saying: “As my little boys disappear into the past, I cling to these stories to prove they lived.”

It wasn’t bad.  It was maybe even good.  But it didn’t outshine the other talks, so to me it was a disaster.

Over the next few days, I thought about what had happened.  I had treated the talk as a competition when the point was to connect – and people don’t connect by reciting lines to each other.  They connect by opening up, confessing an emotion, a goal, a pain or a flaw that unites them with others.  I was trying to be separate from others – and better.

I was a speechwriter for Bill Clinton.  So my talk had to be better.  If my talk wasn’t better, then who was I?

Apparently, I was someone I didn’t want to be. 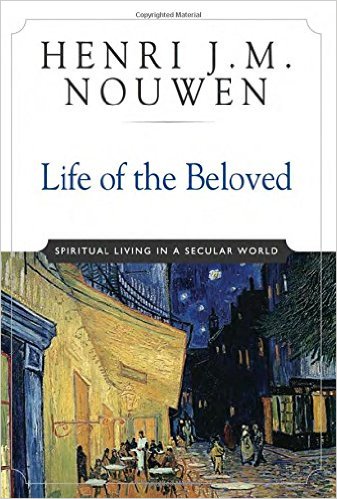 Henri Nouwen writes, “Isn’t arrogance the other side of self-rejection?  Isn’t arrogance putting yourself on a pedestal to avoid being seen as you see yourself?”

If I had understood that what I was really seeking was not adulation, but a feeling of connection, then I might have found the guts to introduce myself as a guy who is desperate to impress, as a guy who needs to tell stories about his boys.

I might have said: “I memorize these stories and tell them because I’m terrified that my children will become adults and I won’t remember their being kids.”

Or I might have given my talk and then said:  “I spent ten hours writing this talk, and I recited it instead of telling it because I wanted to hide behind it – because the talk I wrote is polished, but the guy who wrote it is not.”

I might have said that, but I didn’t, because I wasn’t willing to be wounded – and that’s what got me hurt.

My “sacred object” that night was not really stories about my kids.  My sacred object — the most precious thing that I brought with me that night — was my mask, the self-image that I place between me and others to guard against the feeling I don’t belong, but which then keeps me from a feeling of belonging.

That was my harsh and gorgeous surprise at the retreat: seeing how honest conversations stir me up because they make me want to put on my mask – and then they mess with my mask.

The concept of “mask” was not an abstract one at the retreat.  They had several workshops on it – and the workshops alarmed me even more than the sacred object talk did, because I have a million masks, and I know it. 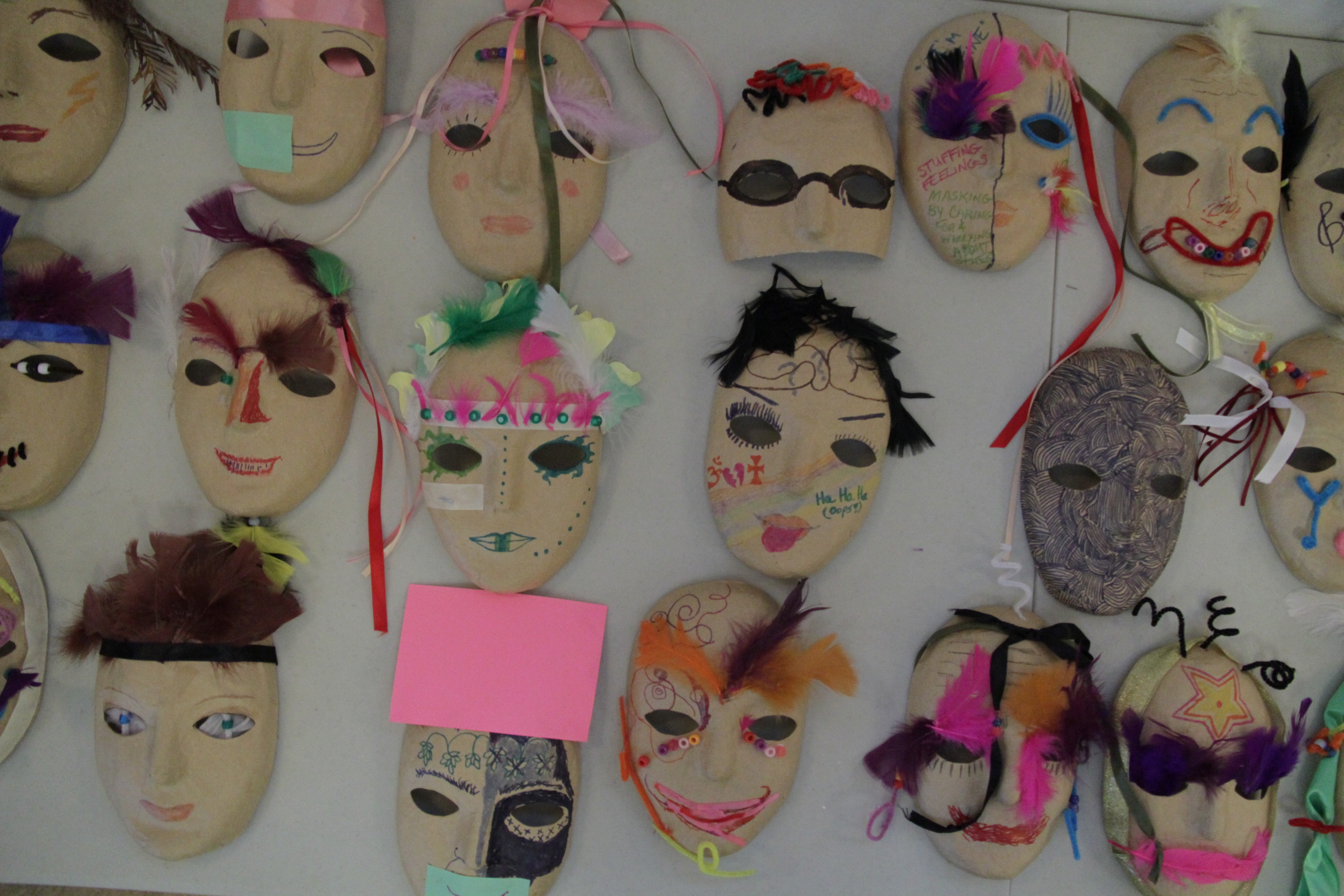 My most audacious and ridiculous mask is the mask that says I have no masks. “I don’t need a mask.  As a result of rare spiritual gifts and the work habits of a saint and the guidance of enlightened teachers, I am (choose one or more):  (1) a successor of St. Francis, (2) levitating right now, (3) better than you at least.”

That is a dangerous mask to bring to a conversation about masks.  The secret to protecting the mask is to make sure it’s never tested.  If my mask is: “I’m a great golfer,” I’ll probably be safe at the retreat.  But if I have a mask about not needing masks, then a serious conversation will force me either to admit the mask and tell the truth – or deny the mask and expose myself by trying to conceal myself.

This conflict between admitting the mask and denying the mask is a conscious one for me, and that’s why the workshops scared me.  I know that my mask is a mask.  I know I’m putting forward a false face, but it’s still a face that’s dear to me – it is still my face to myself – and I don’t want anyone to strip it from me … because I’m not yet reconciled to the fact that I’ve given my whole adult life to this spiritual pursuit – doing the work that would let me shed my mask – and after all this effort, I’m not much different from anyone else.

If you stood me in a line-up of a hundred people and put us through experiments designed to irritate us, and then asked observers:  “Identify the guy who’s been meditating for 35 years” – no one would pick me, the rigid German with the Irish temper.  I’d be like the crestfallen child not chosen in gym.

That’s why the retreat shook me up.  There is a big gap between who I am and who I pretend to be, and the retreat asked me: “What are you going to do about the difference – admit it, deny it, or try to avoid it and hate the people who pose the question?”

On day four my masks took another shot when I was asked to give a talk on meditation. That invitation took my two top conceits – my mask about being a great speechwriter and my mask about being a great meditator – bundled them into one and put me on stage in front of people I had failed to impress a few days before.  I had to choose:  I could exhaust myself by trying to hold up the masks or I could take a risk and drop the masks and be who it was I was trying to hide.

I chose to hide.  I decided to stay up late, read my journal, pick the best lines, write my talk, and read it to the group.  The prep would take … about ten hours.

“Why!?!” a friend asked me when I told her my plan.  She was a facilitator at the retreat and trained in “generous listening,” but for special occasions she also did generous advising – and she wasn’t rationing her views:

“You know this; why would you write it and read it?!”

“If I don’t write it and read it, I won’t remember what I want to say.”

“But if I just say it, I won’t remember all my great lines.”

“But if you read it, you won’t think up any new lines.”

Walking back to the cabin that night I stumbled on the middle path.  I gave my talk from notes.  It wasn’t wholly extemporaneous, but at least I struck a more daring balance between preparation and improvisation.  People liked the talk, I felt great, and it created the perfect bookend for my retreat – easing the mask for the guy who showed up desperate to be the best. 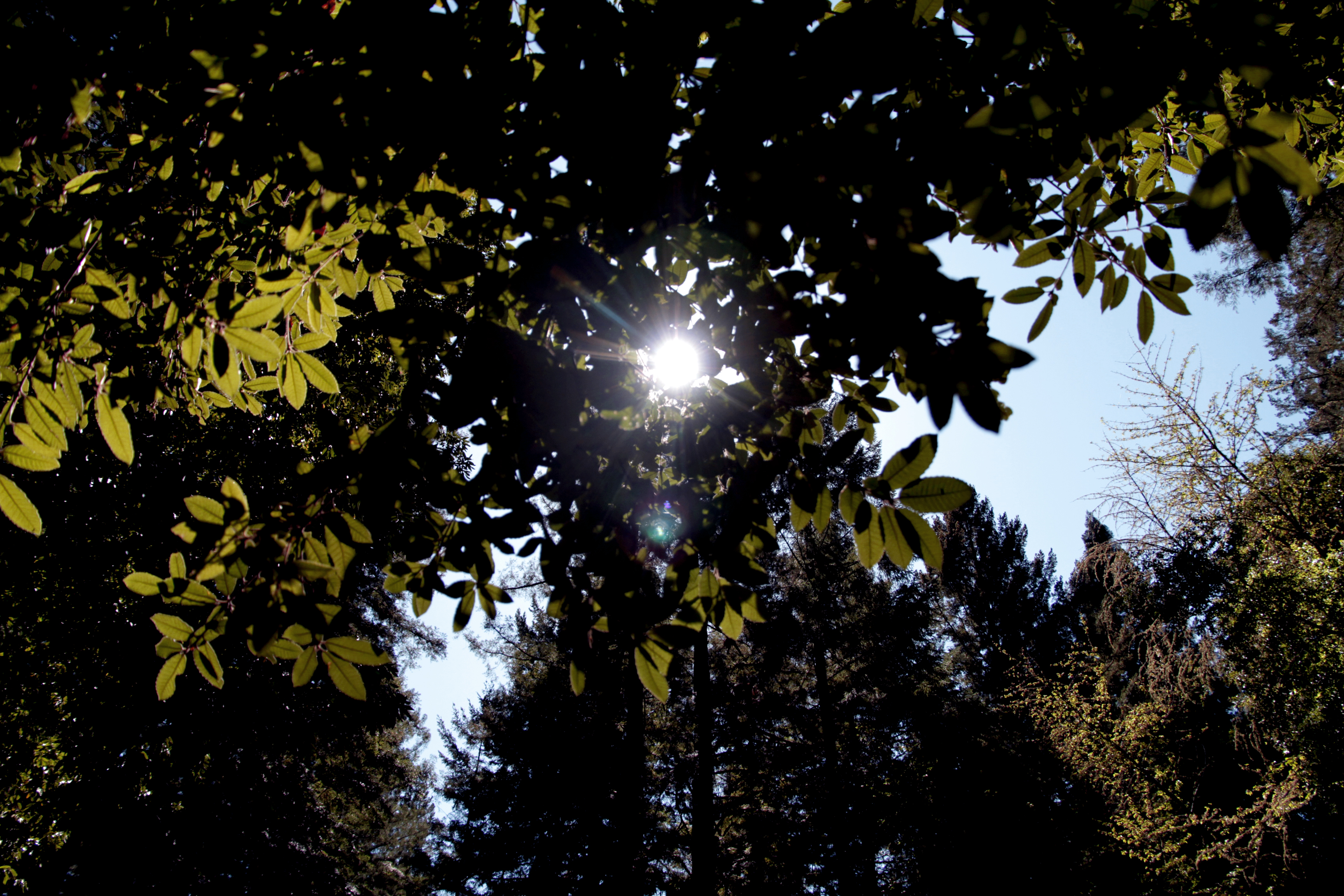 But the retreat wasn’t done with me.  The following day, the last day, one of the facilitators asked us to talk on video for a minute about the retreat.  The idea appalled me.  They wanted us to just stand up and talk?!  Without notes?  Or a podium?  Or a teleprompter?  Then I realized:  “Oh man, the video talk is not about the retreat; for me it is the retreat – another nudge to drop the mask.”

I asked a friend if she was going to do it.  “Of course!,” she said, puzzled by my question. Then I saw people talking into the camera. I was afraid for them. They didn’t seem to know this was going on their permanent record.

Finally, I gave in. Kind of. I still couldn’t just stand and deliver; I had to write down what I wanted to say, so I went back to my cabin and scribbled down some ideas.  Then I stuffed my script in my pocket and went to the site and recorded my talk.

How did it go?  See for yourself.

I sound so nervous – like I’m explaining how I couldn’t have been the guy who robbed the bank.  But I think you can hear a little bit of my joy – and it’s more than I would have dared five days before.  It was a sweet way to end the retreat, which gave me, in the end, perhaps the strongest feeling of community I’ve had since college. 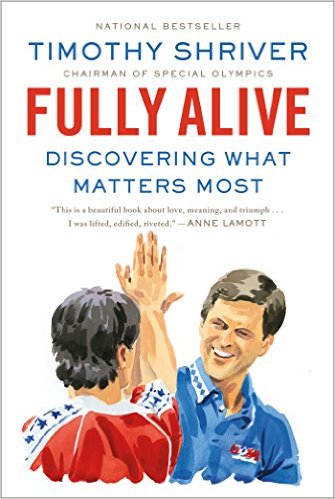 In Tim Shriver’s startling book “Fully Alive”, he writes about how we “so often reject the very people and things that carry the secrets of belonging….”

That’s how I began the retreat – rejecting the people who held the secrets of belonging.  But by the end, it was becoming clear that for me the secret of belonging is being with people who prompt me to drop the mask.

That was March 2015 in the Redwoods. The next retreat is June 2016 in Spain.  I hope to go, but the timing makes me anxious – I have only four months left to prepare my sacred object talk.  This one is going to be genius!

Tom was a national security speechwriter for President Clinton and foreign affairs spokesperson for Vice President Gore. He is a member of the International Integrators Advisory Council.