We´re Making Enemies Faster Than We Can Kill Them

In the post 9/11 era as the United States took the war to Iraq and Afghanistan, I saw a bumper sticker on a car driving in front of me that said: “We’re making enemies faster than we can kill them.” I recalled that message this week during the xenophobic hysteria fueled by Donald Trump’s clarion call to ban Muslims from entering the US.

Human history is filled with tragedies that stem from a cycle of violence incited by the question: “Who can I blame for my feelings (my misery, my fear, my shame)?” Xenophobia and scapegoating have as their premise the belief that: “Someone is making me feel bad.” 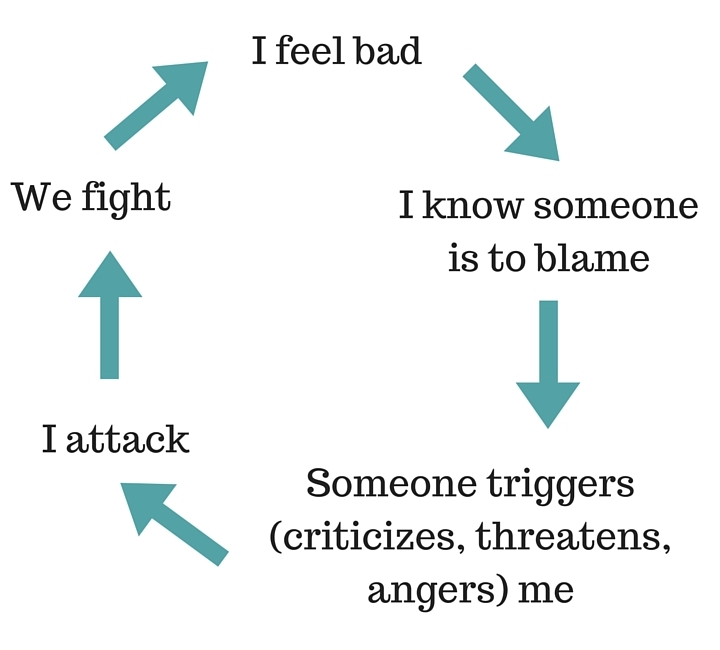 It’s easier to blame someone else than to deal with our own bad feelings. This cycle of violence will only be broken when we take responsibility for our feelings and stop blaming others.

In our Living Whole immersion retreats, I facilitate a workshop based on a book I wrote in 2013 entitled Odyssey Family Systems Companion Guide. We are formed by what we go through when we are children and experience how fragile and unpredictable life is. We deal with the fear, pain and shame of being in fragile human form by developing coping strategies that, in the Odyssey model, I personify as seven young Parts of Self. In future blogs, I will focus on each of the seven.

Donald Trump’s message spotlights the young Part of Self that is called the “Judge/Globalizer.”

The Globalizer takes a tiny bit of information and makes it true for all time.

Together, the Judge and the Globalizer create a worldview that, in its attempt to protect us, causes a lot of misery.

Trump’s Judge says, “I have nothing in common with the radicalized Muslims that have perpetrated terrorist acts. I am separate from them.»

Trump’s Globalizer says, «Some radicalized Muslims have engaged in acts of terror and all Muslims are capable of becoming radicalized. Therefore, we must ban all Muslims from entering the United States.”

The media has focused attention on these views, as with Trump’s previous hate-mongering proposal to construct a wall along the US/Mexico border. When someone gets this much airplay, you know that he has hit a nerve. He has activated the young Parts of Self in others. He has voiced something that many people identify with: Separation is the remedy for Bad Feelings.

Historically, separation is safety and has caused humans to form clans, tribes, nations and alliances. “WE live Here.” “THEY live There.” But this remedy does not take care of the bad feelings of pain, fear and shame that drive all of our Judge/Globalizing behavior.

In the Odyssey model, the Judge/Globalizer is a young Part of Self that helped us survive our childhood injuries. As adults, we learn to take responsibility for our part in the violence cycle so that we can break the cycle. To do this, we develop the skills to “parent” the young Judge/Globalizer.

When we parent the Judge/Globalizer, we listen, really listen, to our bad feelings. We feel them. That opens the door to healing.

In my career as a doctor, I have cared for many people who have experienced violence. I have deeply listened to the stories of victims of violence and perpetrators of violence. I have witnessed their courage as they have worked with their bad feelings and learned to heal themselves. And I have watched in awe, admiration and gratitude as they have, in turn, contributed to helping others feel their bad feelings and learn to heal.

These are the people I look to as my heroes. They aren’t famous. You would not know their names if I told them to you. They are people who have parented their Judge/Globalizer well enough that it no longer runs their lives.

The Judge/Globalizer is too young to see the connection between the violence we perpetrate as individuals and its direct impact on the world and even the health of Planet Earth. This young Part of Self cannot see that the civil war in Syria is being fought by, among others, farmers who could no longer feed their families because of drought conditions that are a direct result of global warming. The Judge/Globalizer cannot see that an American farmer under the same conditions might feel just as desperate, and take desperate measures.

Without separation there would be no estrangements, hate-crimes, robberies, muggings, rapes, murders, dismemberments, genocides, wars—the violence that we call “man’s inhumanity to man.” Generally we only attack someone to whom we don’t feel connected.

We intuitively know that the salve for the misery of separation and violence is connection. But, we have yet to learn how to broaden and sustain connection.

The misery caused by separation and violence causes us to instinctively come together. After the terrorist attacks in Paris and California, people gathered to weep, to embrace, to place flowers, to share words and songs. But then some of them went home and, with the encouragement of Trump and others, identified someone to blame. Any connection that they felt when they came together was temporary or limited to exclude the perpetrators of the violence.

The blame activated by people like Trump does not reside only with the individuals who actually engaged in the terror and violence. It globalizes to: “It’s the fault of all people who I believe look like those who perpetrated this atrocity.”

Since Muslims are the “group du jour” (in other eras, other groups have had this honor), this causes more Muslims to feel separated from the rest of society and makes it more likely that some will engage in violent acts. Trump is perpetuating this cycle of violence by engaging in generalizations of blame and advocating separation.

Humans are experts in this violence cycle: 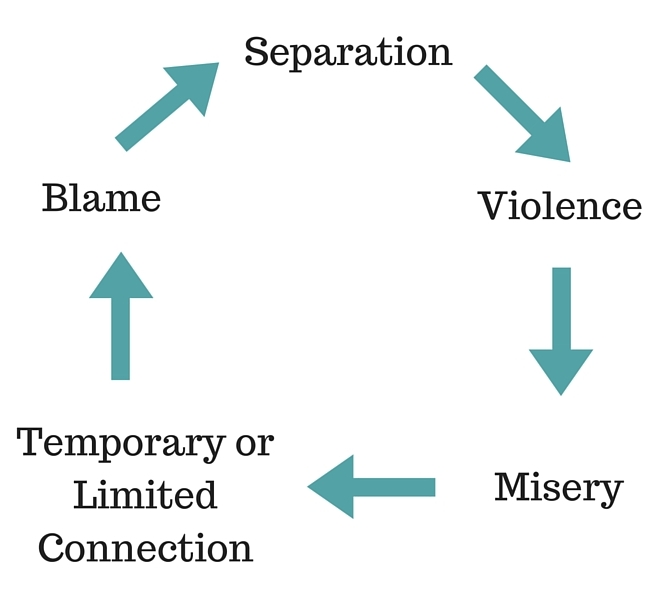 It is a cycle that has run its course countless times over all of the millennia that humans have existed on Earth.

Each individual has a role to play in breaking the violence cycle. In International Integrators, we start as individuals and bring to consciousness that which has previously been unconscious.

Maybe in the past we did not see scapegoating as creating a violence cycle. Now we do. We can learn to feel connection with people from whom we used to separate.

At times like this, we look to history, artists, innovators and inspiring leaders to help us know how to forge a new path, how to break cycles of violence that have been getting us nowhere.

In next week’s blog, I will focus on the work of heroes like Desmond Tutu, whose 2014 book, “The Book of Forgiving”, is one that you will want to read, and James Cameron, whose TV series, “Years of Living Dangerously”, is not to be missed.

During Living Whole Redwoods 2015 last March, our filmographer, Tristan Martineau, spoke with a participant who has been to many retreats. She found her experience to be one of the most powerful she had ever had:

The next Living Whole immersion retreat is in Ávila, Spain in June 2016.

We can change the course of our own lives and of life of Planet Earth with action, with developing awareness, with parenting our Judge/Globalizer, and with cultivating sustained connections. This is work and it is worthy of our time and effort. And it is the best way to save ourselves, our children, our grandchildren and our planet.