Your Integrative Toolkit for Cold Care

My daughter called me on the phone after taking her 15-month old baby to the doctor. Her voice was filled with the concern of a first-time mother whose first child had her first upper respiratory infection.

“Mom, the doctor says that giving guaifenesin to Bianca is both dangerous and useless!”

Growing up with a primary care internist mother, my daughter had listened for years to my phone calls with patients who paged me about their cold and flu symptoms. One January weekend we counted 82 beeps. She had cared for her own cold and flu symptoms her entire life with the “five things” that I used to teach my patients. Guaifenesin, the active ingredient in Robitussin®, Mucinex® and generic brands of these remedies, is the only pharmaceutical among the five.

“Uh oh”, I thought. Maybe I was going to find out about a new study on guaifenesin that challenged my practice.

Actually no.  I was about to find out, again, that the conventional wisdom of conventional medicine isn’t always so wise.

I consulted the medical literature and found nothing, and so I phoned my cousin the pediatrician.   “Josh, do you know of any new studies that look at guaifenesin and its dangers and efficacy in 15-month-old children?”

He called the next day, saying that there was nothing in the pediatric literature.  He did find a study showing subjective benefits for adults, but no difference in the frequency of coughing between patients on guaifenesin and patients taking a placebo.  He said someone might infer from that study that guaifenesin had minimal benefits.

I asked my cousin, “Do you find studies showing the medication is dangerous?” He replied, “No”.

Again! I thought.  I took a deep breath and let out a frustrated sigh. My granddaughter’s pediatrician had used his voice of authority to frighten my daughter, and he had no scientific literature to back up his advice.

I so often hear people disparage Integrative approaches to health and healing for their purported “lack of scientific evidence”. After 30 years practicing conventional medicine, I am well aware of the amount of advice doctors give that has no “scientific evidence”.

So we punctured his first claim.  There is no evidence that guaifenesin is dangerous.

I figured, if the doctor was relying on this study to say that guaifenesin is useless, it has to be on the following hypothesis:  In the case of an upper respiratory infection, cough is a problem. An effective treatment should reduce or eliminate the problem. If the cough is not reduced or eliminated, then the treatment is not effective.

But coughing is not the problem; the virus is the problem. We evolved the ability to cough as a way to clear viruses and other invaders from the throat and lungs. It’s the response of a healthy body that is trying to rid itself of a virus. When you suppress a cough, you suppress the body’s ability to fight for itself.

So the fact that the people taking guaifenesin in the study did not cough any less than those taking a placebo is a good thing.  You don’t want people coughing less if you want them to get well.

Guaifenesin is an expectorant. It works by thinning and loosening mucous in the airways, clearing congestion, and making breathing easier.

But that was not tested. The logic of the study was:

Guaifenesin does not reduce coughing.

Josh concluded our phone call with, “Thanks for the question and conversation. I suspect I now know more than any of my colleagues about guaifenesin!” 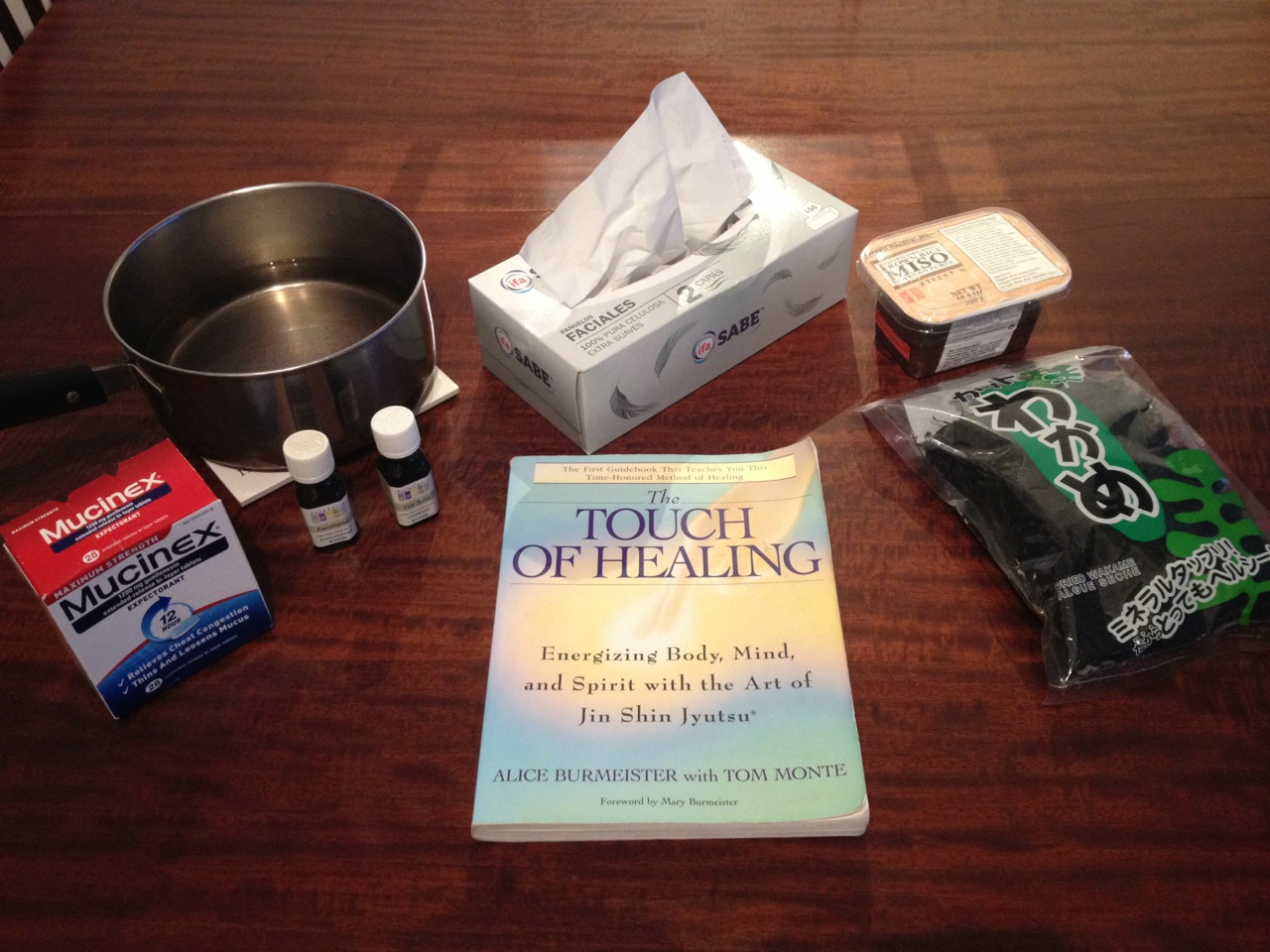 Your Integrative toolkit for cold care.

In my over 30 years of medical practice, I have observed that measures to thin mucous, including guaifenesin, have shortened the course of viruses contracted by my patients. By thinning mucous, you clear the pathways so that the immune cells arrive at the site where the virus has landed. This helps keep the mucous from pooling in sinuses, middle ears and lung tissue where it can set you up for a bacterial infection. I recognize that there is precious little research that either supports or contradicts my observations.

Over time, I developed the following recommendations, the “five things”, that my patients learned to do for self-care when they got sick with a virus:

1. Drink fluids to the point of passing urine every 30-60 minutes (water, herbal teas and juices).

2. Give yourself hourly steam treatments when you are not asleep. Boil water in a saucepan with 2-4 drops of either Tea Tree Oil or Eucalyptus Oil (alternating each hour). Breathe in the steam until the pot cools (2-3 minutes).

3. Put a vaporizer at your bedside (make sure to clean it frequently, because it can build up with germs).

4. Take guaifenesin at the maximum dose allowed (be sure to get plain guaifenesin with no other active ingredients in the product).

5. Rest (get a doctor’s note, if necessary, to stay home from work or school). Allow people to take care of you.

People need something “to do” while they wait the 3-28 days to get over an upper respiratory infection. Some adults fill this void by spending from $50-$100 on over-the-counter cold remedies, many of which do nothing to help the immune system.

People who seek medical attention want the health professional to “do” something. So, they request antibiotics. But, antibiotics don’t work on viruses.

In recent years, I have added two additional recommendations:

6. Drink miso soup three times a day (unpasteurized brown rice miso, aged at least 18 months) to help boost your immune system. Add boiling water to a coffee mug in which you have placed several small pieces of dried wakame seaweed, if available. Then stir in a generous teaspoonful of miso paste. Never boil the miso since this kills its favorable properties.

Several Jin Shin Jyutsu self-care holds and flows (series of holds) will help you to support your immune system. You can learn more about these in Alice Burmeister’s book, The Touch of Healing. Especially focus on the Spleen Flow and the Main Central Flow.

Here is the Immune Boosting Hold that you can start using right now:

What follows is the story I told my patients during my years as a primary care doctor. Because of hearing it, people were motivated to engage in self-care. They did the “five things” before consulting me. They were proud to tell me that they had been diligent, and had stayed home to rest. If they did come to the office, it was for a bacterial throat, ear or lung infection that appropriately needed antibiotics.

So if you catch a virus this season, these seven recommendations will support your body’s immune system with an Integrative Health approach to healing. Avoid unnecessary and ineffective courses of antibiotics and over-the-counter drugs, avoid getting exposed to other people’s viruses in your doctor’s waiting room, and shorten the course of your illness.

Here is the story I told my patients that helped them know why I recommend the five (now seven) things. It captured the imagination of Justin, a nine-year old Costa Rican boy, who offered this artistic interpretation: 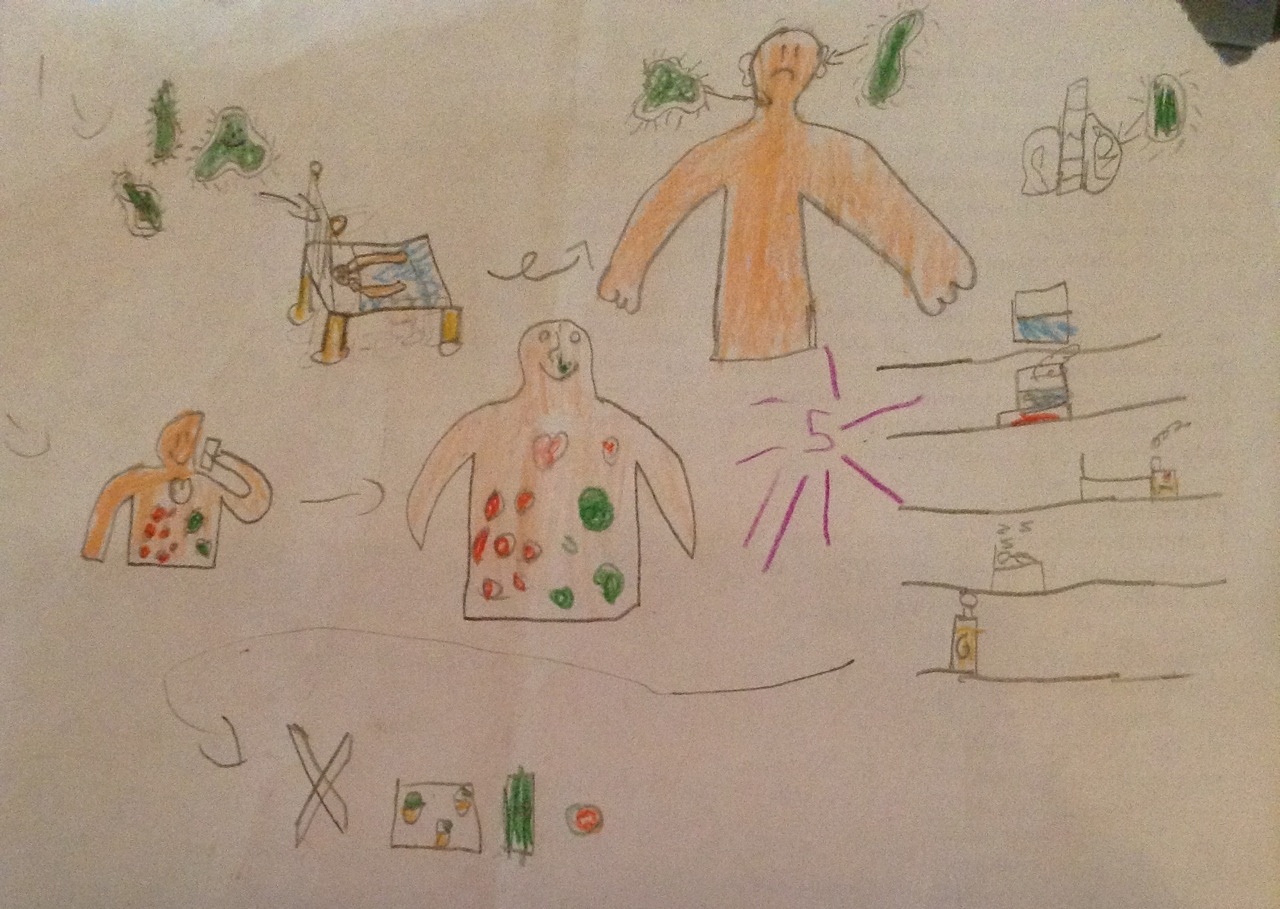 A virus gets coughed on you, maybe by some person you love dearly, maybe by someone at work, school or in the grocery store. It lands on moist mucous membranes like your nose and mouth. It is ecstatic because it has found a lovely place to live and procreate, instead of landing on your shirt. It tries to move deeper, into moister, warmer tissues, like your throat, ears and lungs.

The virus is genetically programmed to take over your body, and it would take over your body if it could. We know this because people whose immune systems don’t work well, like AIDS patients and people taking chemotherapy, can actually be killed by a cold virus.

Most viral infections take between 3 and 28 days to get cleared from your system. Two things affect this:

The activity between the immune cells and the virus produces mucous. Mucous lets you know that your immune system is working effectively. Mucous builds up and gets coughed and sneezed out. The more the mucous is thin and liquid-like, the more easily it is moved out of the body by coughing and sneezing.

The seven things help your immune system do its job. Print out the list of the Seven Things to Do for an Upper Respiratory Illness and put it on your refrigerator. As soon as you feel the early signs that you have been invaded by a virus (scratchy throat, sneezing, coughing, fever), call in sick and go to your refrigerator to remind yourself what to do.

Kathryn practiced conventional medicine for 30 years, including primary care internal medicine at the Massachusetts General Hospital and Harvard Medical School from 1992 until 2012. Drawing from her experiences in both conventional and holistic medicine Kathryn created  Odyssey Journey: a Collaborative Approach to Wellness, an all-encompassing Integrative Health practice that includes Family Systems work, guidance in Plant-Based Nourishment, and other Mind/Body/Spirit Disciplines. Kathryn will be co-facilitating the Living Whole retreat in March.