I’m not supposed to get a heart attack!

That was my reaction when I found out that I failed my stress test. I was 55 years old. It was February of this past year. At the time, I was mostly dwelling on the possibility that I might get cancer. That concern was about to disappear. I had never seriously considered getting any kind of heart disease. Even though the evidence was stacked against me, I had managed to convince myself, somehow, that I was safe from heart issues.

My dad had a heart attack and triple bypass in his late 40s. A few years later he had another “minor” attack and went in for angioplasty and stents. His dad, my grandfather, died from a heart attack in his 60s. My two brothers have been on Lipitor for years. My uncle had diabetes. 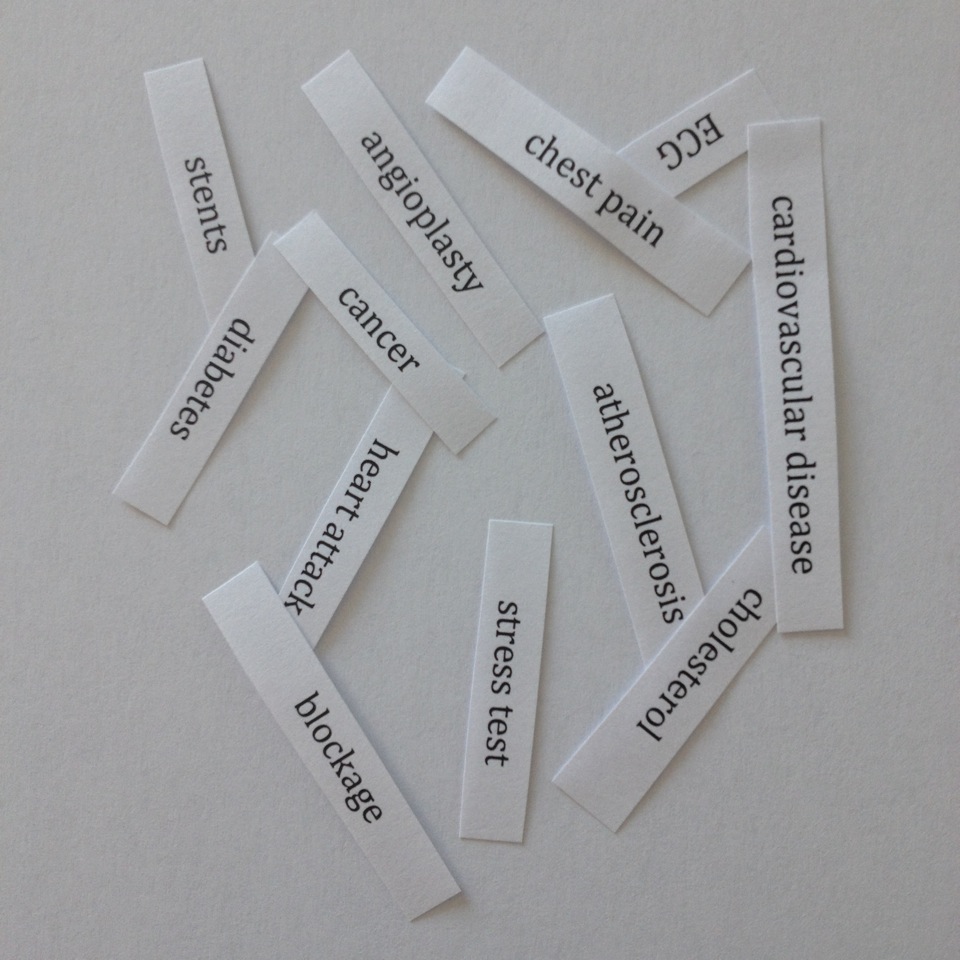 My diet for 25 years after college consisted of frosted flakes for breakfast, pizza or a burger and fries for lunch,pasta and Classico Spicy Red Pepper tomato sauce for dinner. Chips and salsa under melted sharp cheddar was a daily treat, and the M&M man on my desk happily doled out a good half pound of M&Ms, 2 or 3 at a time, from sun up to sun down, day in and day out, for 25 years.

I was thin. I was active. Skinny growing up, and skinny grown up. I was an avid cyclist. I ran cross country for a year in high school and ran to exercise periodically. I had completed several marathons. I could hike the mountains in New Hampshire and hardly break a sweat. I was thin, fit and healthy. My brothers were the ones who needed to worry about heart disease. Not me.

Diet? I could eat anything. I had a high metabolism. The fire would burn it up. No problem. I was not supposed to get a heart attack. I had my mother’s blood. My mom’s mother lived into her 80s and died in her sleep of old age, though I’d never stopped to wonder what “dying of old age” meant. I had to worry about cancer, which my mom had died from. Not heart disease.

I had my first stress test when I was 51. I had to convince the doctor to let me have one, because even the Framingham Heart Study worksheet said I was low risk. He told me that stress tests are usually only to confirm you have an issue after you get angina and have other symptoms. I was not a smoker, not a drinker, 50 years old, and had no worries. I wanted a benchmark though. I wanted to convince myself that I was as healthy as I knew I was. And I passed with flying colors. Of course I did.

I recall a line from The Big Chill, when Jeff Goldblum’s character smirks something like, “Just try to go a whole day without a good rationalization.” I remember it because I didn’t get it when I first heard it, and then years later it dawned on me. Though I guess I only “half got it”.

5 years passed and I was approaching 55. It was February, and I was about to go in for a hernia operation the following day. That evening, though, I got a call from the office of the anesthesiologist. He had canceled the surgery. Apparently there was something in my pre-admittance call with the nurse about chest tightness. Hmmm. I guess I’d mentioned that I’d told my primary care doctor about some tightness when climbing the hill back to our house after a walk. That was almost a year ago. He had given me a piece of paper to get a stress test, but I had never gone.

After all, that chest discomfort couldn’t be heart disease. It must be stress, or anxiety, or the natural aches of being 55. The twings and twangs of aging, those are normal, no? I’ll get around to that stress test but work and everything else is just so busy these days.

I had no more excuses now. I scheduled the test and went in. Piece of cake. The nurse and I chatted while she ramped it up, literally. A stress test is basically running on an incline treadmill. The incline is increased periodically to get your heart rate up. An ECG measures how your heart responds to the increased activity.

She suggested keeping my legs relatively straight, like a fast walk, rather than lifting my knees and jogging. That made it even easier. Well underway, the nurse asked me how I was feeling. “No problem, I can keep going.” Chest pain? “Not really, a little tightness, but I can’t really say if its heart related.”

She stopped the test and we wrapped it up. Great.  Another successful test.  Of course. A few minutes later, the doctor came in. He explained that I did pretty well, and that the ECG was showing a small blockage. And that he wanted to schedule a follow-up nuclear stress test.

My reaction? Sure. No problem. On the way out the door, I stopped at the counter to pay my co-pay and schedule the next test.

Then the shock wave hit. 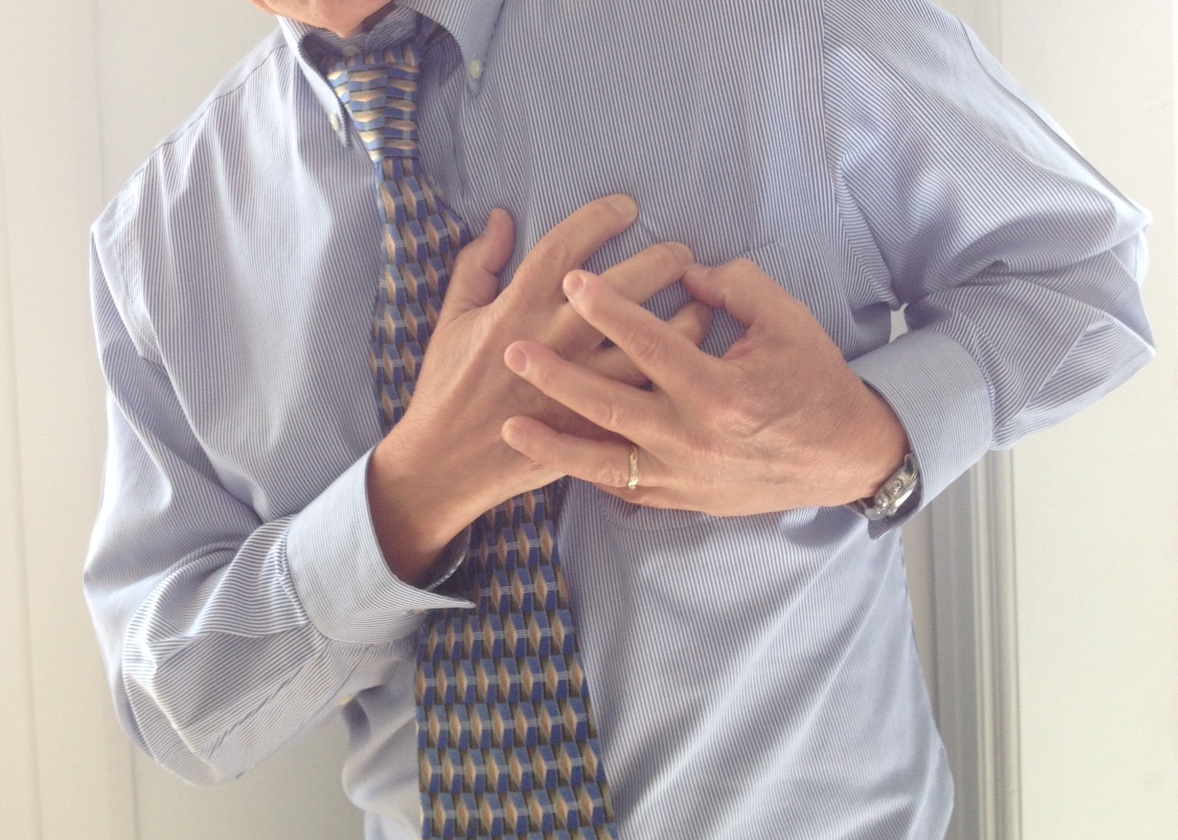 What? Blockage?! What just happened? I don’t have heart disease. I’m not supposed to get a heart attack. My brothers are the ones we worry about. I have my mother’s blood. I’m thin.

And then Google chimed in, “Stress tests are a crude test because they only show blockage after it is 70% or greater.”

All of a sudden, I was in a whole new world. My blissful ignorance was gone, replaced with fear and shock. My complete lack of awareness and utter stupidity exposed. I wasn’t healthy at all, and I hadn’t been for a long time. The reality is that I was going to have a heart attack.

**In his second essay, Tom discusses his discovery of the Esselstyn diet and how he arrived at a total cholesterol of 70.**

Tom is a self-employed software developer. He works with several Fortune 500 companies to develop and maintain web-based applications for their marketing groups. He is currently living in New England with his wife and son. Tom has always had an interest in alternative forms of healing and wellness, though more from a general desire to learn and explore than to support his personal health. His outdoor activities include cycling and snow shoeing.