Things haven’t been the same since a stress test at age 55 showed an arterial blockage and that I was at risk of having a heart attack. After getting the bad report, I could no longer cling to the story that my external appearance of good health meant I was safe. I was in trouble on the inside.

My life has since been a mixture of fear, worry, resolve, anxiety and acceptance. Fear that I could have a heart attack and die at any moment, worry about my son and wife if I do, resolve to do whatever it takes to avoid a heart attack, anxiety with every new twing or twang in my chest, and acceptance that “it is what it is—what can I do now?”

On the plus side, I’ve picked up an adrenalin rush of resolve that has allowed me to radically change my diet and spend much less time worrying or fretting about the day to day worries. 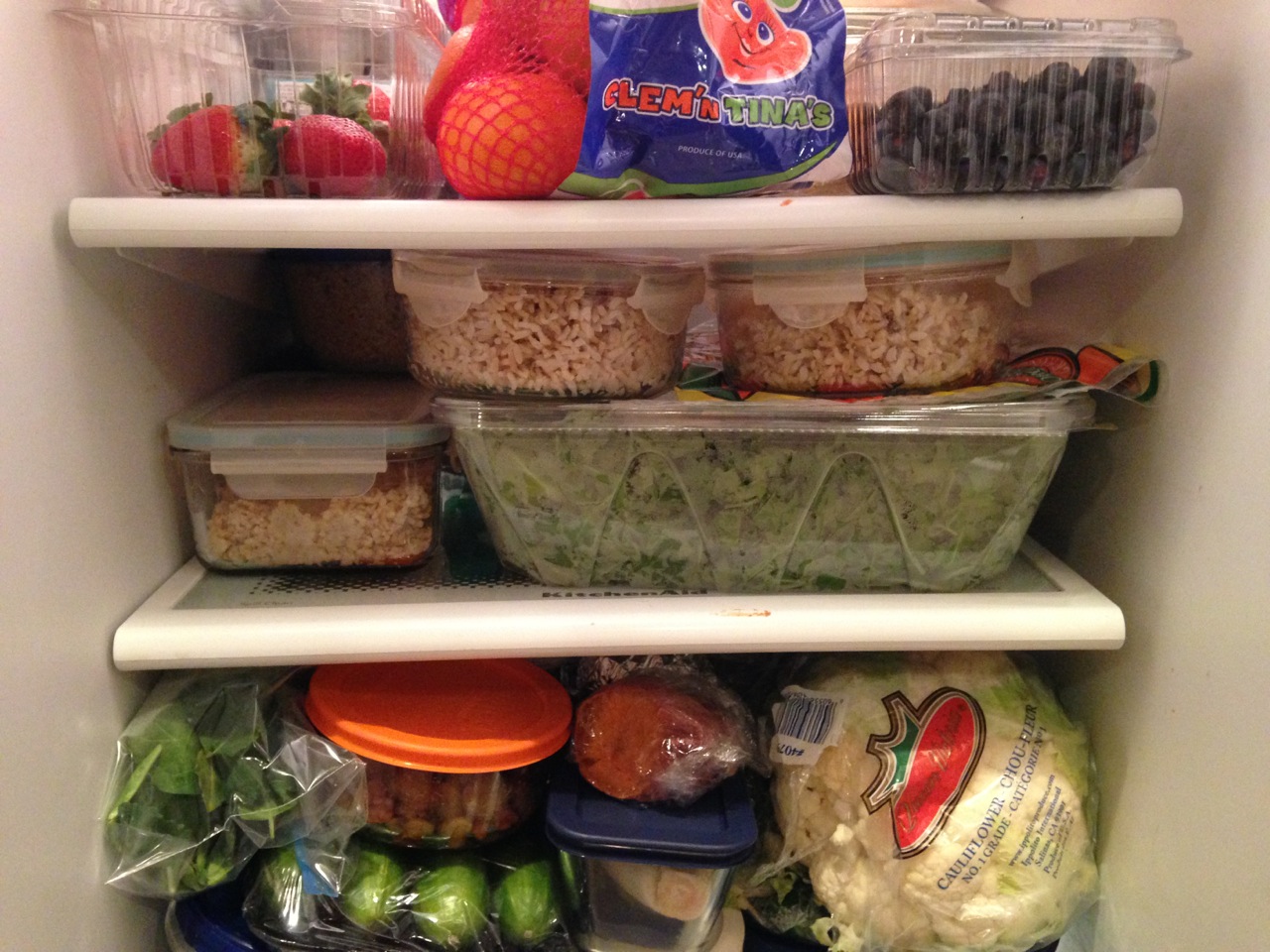 I don’t let myself get as riled up about things as I used to, and I don’t fret about them as long when I do. I’m more conscious of how those upsets are going to impact my health – not just my physical health. I’m taking more time to smell the roses and enjoy the moments.

The most important rose in our garden is our son. Several days a week I watch him walk off down the street to the school bus, marveling at the blessing of our son. We adopted him later in life, as a young child. And it has been a joy for us each and every day – the daily sweetness as well as the daily challenges, each part equally wonderful.

He is a large part of my motivation. There is no way I’m going to let my heart disease take away his dad. I have a goal to be here past his 30th birthday. I’m not greedy. I don’t need to live to 100. But I do want another 20 years. And I’m going to do whatever it takes to get there.

On the way home after receiving the news of my blocked artery, I stopped at Walgreens. I needed some kind of chain to wear around my neck, with a container to hold 4 aspirin. A friend’s brother had recently died of a heart attack. He was only in his 40s. He was driving home from work, pulled over to the side of the road, and died. I was concerned this could happen to me now at any moment. 25% of heart attacks result in death like this. For the other 75%, the person gets a second chance. I wanted to make sure I was in that second group. Most heart attacks result from a rupture of the inner lining of an artery. The body starts to scar over the rupture and that scarring slowly builds up over several minutes, resulting in the blockage of the artery. Having regular aspirin handy to chew on can help to slow that process until you can call 911 and get help. I picked up my pill container, filled it with aspirin, and have worn it around my neck since that day.

It was a long drive home and I had time to think. My mind was racing. I’m an engineer. Thinking of solutions to problems is how I relieve stress or get to sleep when I’m restless. I recalled that a gluten free diet could raise HDL, which was one of my problems with cholesterol. I needed to do something. Anything. And so, starting from that moment in the car, I decided to become gluten free. I didn’t eat gluten for 3 months straight. In the process, I lost 20 pounds. I was thin to begin with, and now I looked emaciated. But it helped ease my mind that I was doing something to help myself. I had 55 years of eating anything I wanted. I figured that if I’d eaten my last plate of nachos, had my last serving of chocolate cake, my last slice of real pizza, then so be it. I’d clearly had far more than my share already. My arteries were a testament to that.

At the end of 3 months, I asked my doctor about having a blood test. He obliged, and I found my cholesterol had dropped from an already reasonable 170 down to 100. My problem had never been high cholesterol, but low HDL. The ratio I’ve been told to beat is 3.5 for Total Cholesterol/HDL. Mine had always been in the 4s and up. It was now 3.6. Granted, my doctor had also put me on a daily 80mg statin, Lipitor, the maximum dose apparently. So I wasn’t sure how much of the decrease was diet and how much was drug.

In the mean time, I had been reading hundreds of articles and web pages about diet and heart disease. The 3 references that stood out were The China Study by T. Colin Campbell, Ph.D., Program for Reversing Heart Disease by Dr. Dean Ornish, and Prevent and Reverse Heart Disease by Dr. Caldwell Esselstyn. The latter is the one that is followed by former President Bill Clinton. 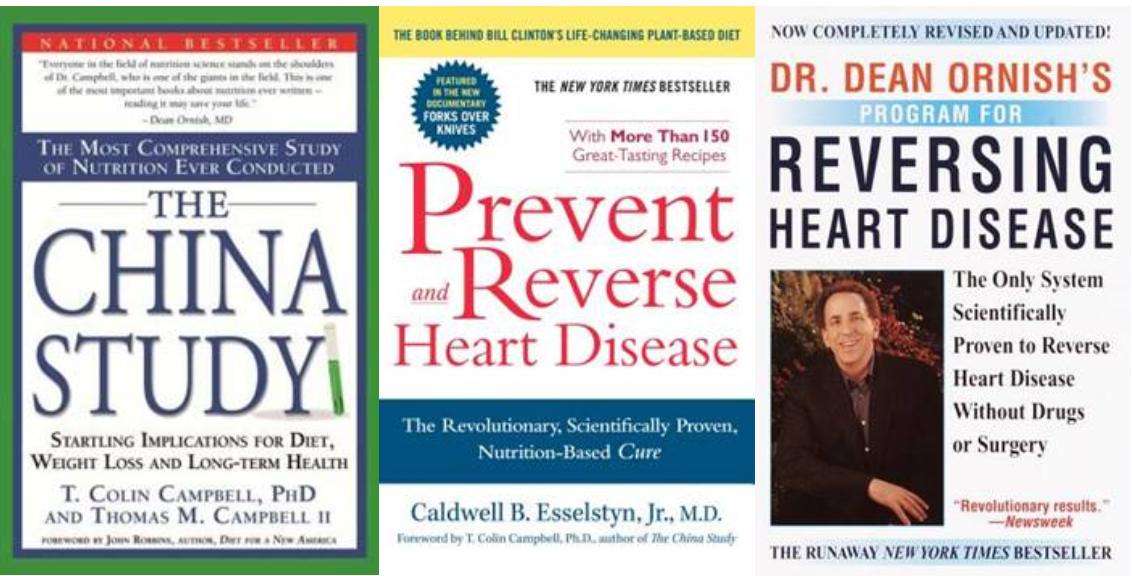 At the end of my 3 month gluten-free experiment and blood test, I switched to the Esselstyn diet. The gluten free diet seemed to be working, but the information was steering me in the direction of the Ornish and Essestyn programs, which are specifically designed to prevent and reverse heart disease. The Ornish and Esselstyn diets are based largely on The China Study, which effectively says “if you eat a diet like they eat in rural China, you’ll protect your arteries from stress and rupture and heart attack.” And you’ll start to reverse the arterial plaque. Heart disease in areas of rural China, where the diet is largely vegetarian, is relatively rare compared to areas eating a typical western diet.

This isn’t so much a diet, though, as a lifestyle change. The reversing takes as long as the building up. If you have eaten as poorly as I had for 35 years, this is not a quick fix or a diet to be gone on and later off. It’s a change in lifestyle.

In simple terms, the diet allows vegetables, whole grains, beans, legumes and fruit. No meat, chicken, fish. No eggs and no dairy of any kind; no yogurt, no cheese. No nuts or seeds. No oil of any kind. Avoid excess salt, sugar, and any white flour or refined foods of any kinds. This diet makes a gluten-free diet look like a cornucopia. 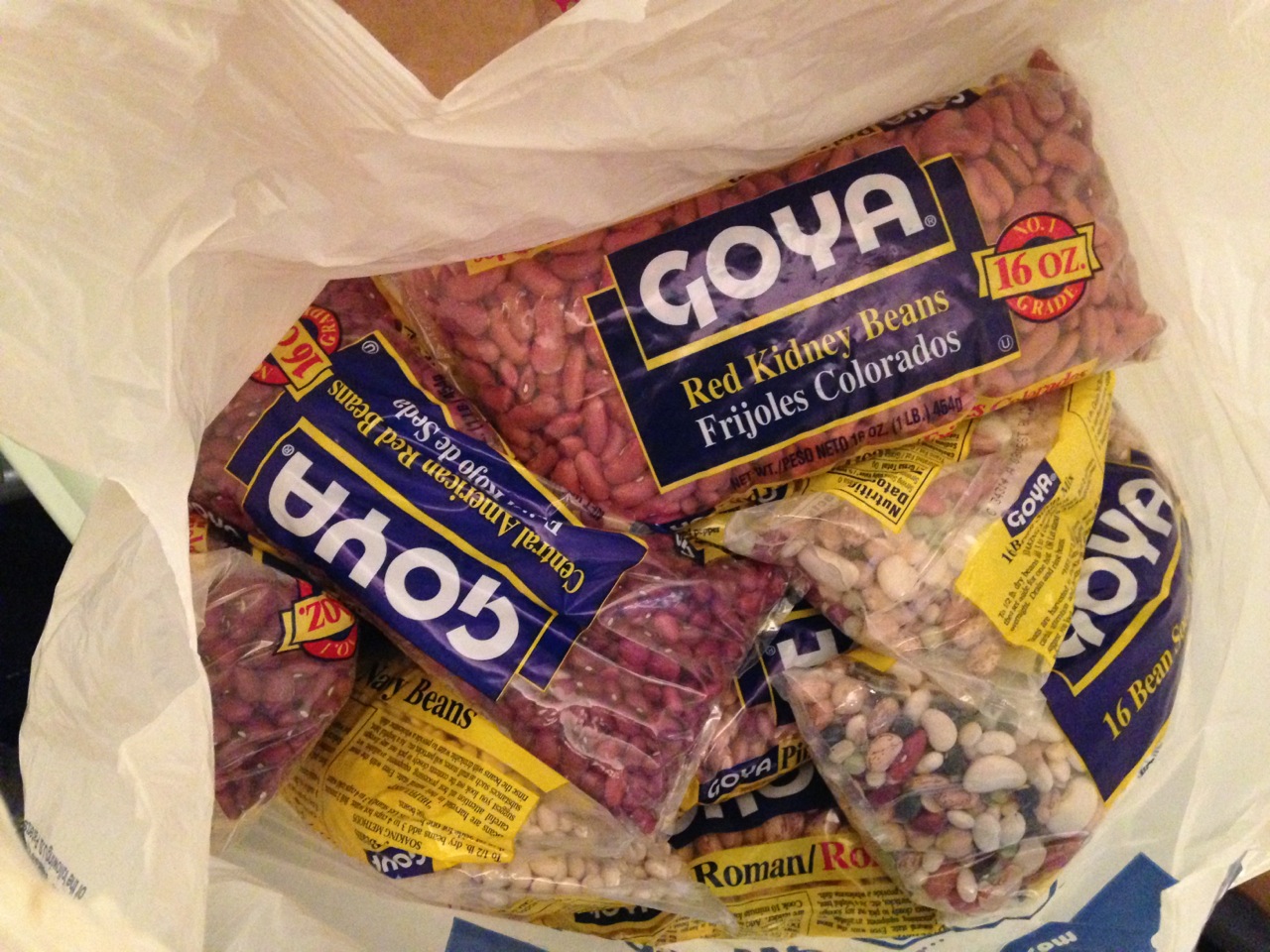 But I’ve found that the threat of a heart attack, confirmed by my bad stress test, and a young son, are extremely strong motivators for me.

3 months later I again checked my cholesterol. It was down to a total of 70. My ratio of Total Cholesterol/HDL was down to 3.0. My doctor said I have a “Third World profile” for my weight and diet. But he also said “you’re definitely reversing your heart disease.” That’s what I wanted to hear.

Can I sustain it?

When I‘ve talked to doctors about this diet, most are in support of it. The main question they have is simply, “Can you stay on it?”

Staying on this diet is difficult. It got easier after the first few months, but has been getting harder as the months go on. I find the hardest part is missing all the fun that accompanies food in our culture. Eating out is almost impossible. The only thing on the menu I can eat is salad. The family outings to get ice cream, pizza and burgers at Five Guys are not as fun when I can’t get just as excited about them. The fun times with my son at the movie theater no longer include sharing a big bucket of popcorn. There is a lot to miss.

It also takes a lot of time. Just about everything has to be prepared from scratch. My wife is working overtime in the kitchen trying to satisfy new requirements with limited options. There are plenty of great recipes, but they take time. And hitting 2200 calories a day eating mostly vegetables and grains and legumes seems to require almost constant eating (and cooking).

I’m about 7 months into this diet, and so far am staying the course. I’ve made it through Thanksgiving and Christmas intact. I had another blood test and my numbers are holding steady. We bought a pressure cooker to make it easier to cook beans and grains. We’re finding new recipes that are easier to make and that actually have some taste. Cinnamon, cumin and red pepper flakes … for a Moroccan stew … never in a million years would I have thought those spices went together. I’ve found some whole wheat pretzels on the internet: Uncle Jerry’s. And my one treat, Ezekiel 4:9 Cinnamon Raisin Sprouted Wheat English Muffins, is showing up in more and more grocery stores. 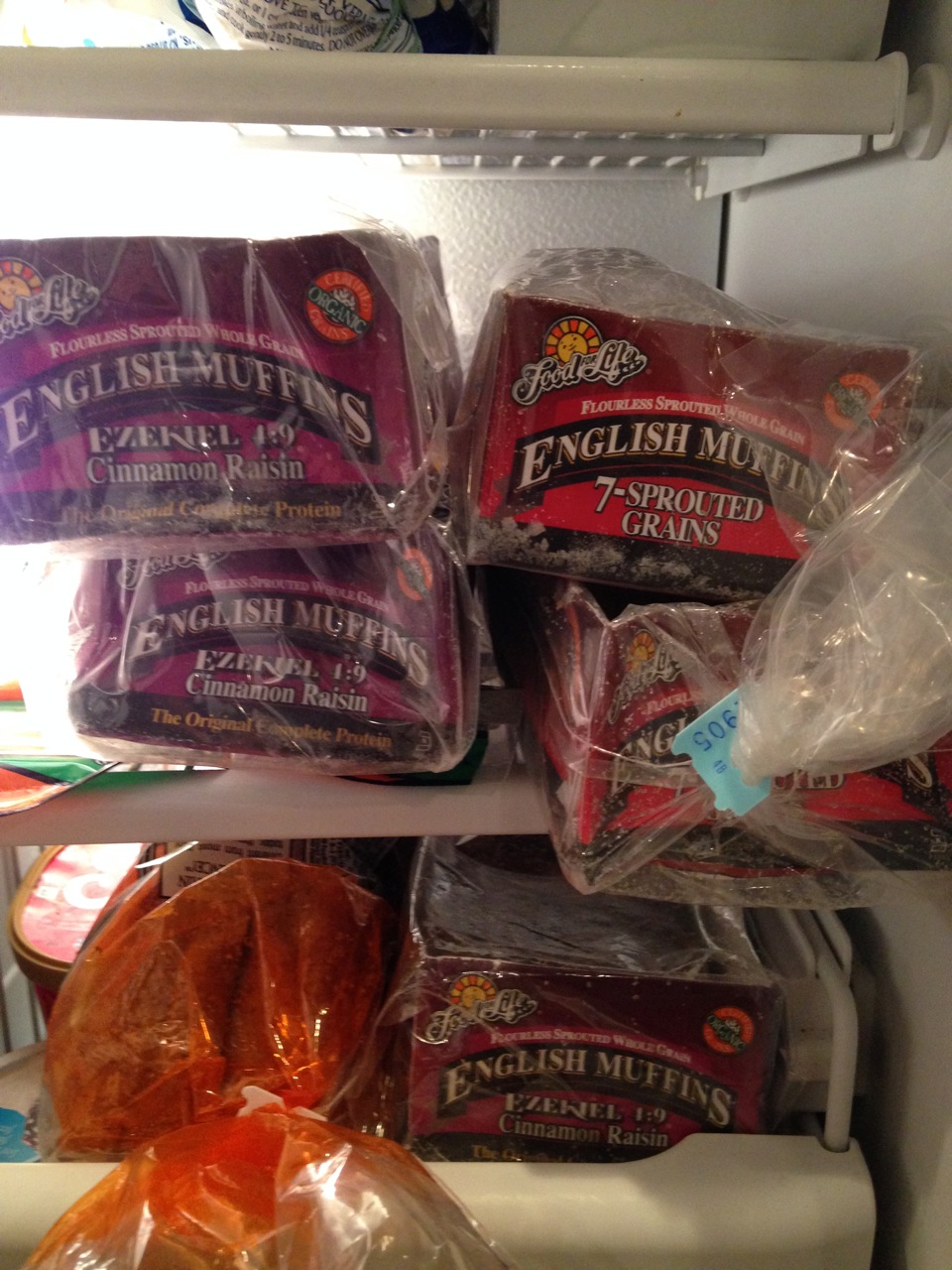 Most importantly, each day I feel more and more protected from a heart attack. And that reassurance is slowing removing the worry and anxiety, and allowing me to recover my hope and optimism and energy. I’m scheduled for another stress test in March. I’m going to be optimistic and expect to pass it this time. If I do, that will tell me I’m on the right track. If I don’t, I’m going to stay the course another year and try it again. I’m no longer unconscious about the impact what I eat is having on my health. I may be overdoing it a bit, but I want to err on the side of living. There is too much at stake.

Tom is a self-employed software developer. He works with several Fortune 500 companies to develop and maintain web-based applications for their marketing groups. He is currently living in New England with his wife and son. Tom has always had an interest in alternative forms of healing and wellness, though more from a general desire to learn and explore than to support his personal health. His outdoor activities include cycling and snow shoeing.